He entered the subway loudly, looking right at me, though I was looking straight at my book.
He asked -- had I seen any good halloween costumes?
I looked at him briefly, muttering, yeah, I saw some good ones, then turned away,
hoping he would leave me alone.
Clearly this person wasn’t well if he was so eager to initiate such a frantic conversation.
He was older, so there was something about that, that made me feel slightly less defensive.
He kept looking toward me and said -- I’ve been asking kids in costumes,
‘what does your costume sound like?’ It really gets them thinking.
I looked over briskly and nodded, oh that’s cool, hoping he would disengage,
still irritated that this stranger was intruding on my reading.
I hadn’t dressed up for halloween, hadn’t even been out and about to absorb the fun and silly energy.
I had forgotten that one of the joys of Halloween is that everyone is out of their own orbit, zipping around,
crossing new paths.

The stranger’s phrase echoed in my ear. I suddenly heard it,
without the muffling wall of my fear getting in the way.
He asks people what their costumes sound like.
I glanced over at him. Why was I refusing this opportunity for connection?
Was my book, my quiet time, this important?
This man was most certainly an artist, maybe even a wizard, some mystical being,
and here he was telling me about the depth of his sensory world,
his appreciation of the poetic artistry of this holiday. This is a gift that I could accept or reject.
I put my kindle down and looked his way. I asked him why he didn’t dress up.
He was on his way to yoga. He asked me what it’s like to read on a kindle, if I miss holding a book.
I did. And also, this was just easier to carry around.
But yes, there was something missing without the texture of the book, without the cover.
It’s like part of reading is also for the hands to feel the words, and instead I was just looking at a screen.
But this fits in my pocket.

He chuckled and showed me a funny cartoon in the New Yorker.
I told him I hadn’t dressed up for Halloween because I was on my way to my Improv Comedy class,
where I would get to dress up as something new every 3 minutes for a different scene.
It is the kind of creativity I enjoy the most -- bubbling up fun ideas,
but not having to actually sew the costume.
Dreaming up the set, but not having to actually paint it.
Creating an image, and then letting it go.
You enter an ethereal space together,
each person’s version with slightly different colors and nuances,
and then you both let the shared image dissipate back into the room around,
clearing space for the next one.
He told me about his piano lessons when he was younger and how he was intimidated by improvisation.
I laughed and said I try to let my music students think it’s easy and everyone can do it.

We were on the subway, but somehow had entered another universe,
one where it was easy to just be two beings reaching out towards eachother.
We were both strangers, and also, for one moment, perfectly known.


He got off for his class and waved goodbye,
a goodbye that felt warm and tender, like an old friend leaving.
I remember how I had almost not even said hello.

Posted by Mariel at 7:48 AM No comments: 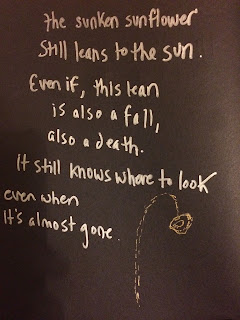 Posted by Mariel at 7:46 PM No comments:

the sound of the waves, the only proof that the ocean was still there.


and then there was me,
floating in the clouds.

I watched as my hand turned into sky,
knowing any moment ...
I too,
could disappear.
Posted by Mariel at 9:19 AM No comments:

Upon seeing him, after not seeing him for months…
The person who used to be my everyday, the one who knew me the most...
I was struck at how the poignant got washed with the mundane.
That though my heart was racing and my entire body shaking,
I asked him about his new hat, he told me about the glasses he just ordered.
I said I was just coming to the coop for a Nugo,
our old language suddenly resurrected, surprisingly intact.
I told him about Quintin the cat voyaging through the neighbors yards.
He said he had been thinking of me, but there was not much more to mention.
The most obvious, present emotion was the last thing that either of us would state.
Instead, I asked him about his chopsticks, his dance-class.
A passerby hearing our conversation might have thought, acquaintances, maybe even strangers.
Unless they saw that my hands were trembling,
and my knees wanting to buckle in when he got up to leave.

It was just a couple of minutes, then suddenly over.

Our time together used to feel so spacious,
like we had all the time in the world to become known to eachother.
And now, after such a brief interaction, not knowing whenever I’ll see him again,
I think back to those lingering days, where the conversation unraveled,
and we shared eachother’s worlds like there would always be more time.
Had we known that it would suddenly be stripped away,
would we still have talked so slowly, or would there have been a more urgent tone,
a feeling to express it all at once?

The last time we hung out, I remember saying
I hate saying goodbye,
almost like a piece of me already knew.
Had I known fully that it was our final goodbye, I might not have actually let go.


There’s a photo from our last time together, before the big rupture.
I’m staring up at the moon, in a long winter coat, though it’s well into spring.
You can see the stiffness in my shoulders.
I remember the stress of my impending move pressing on my shoulders like boulders.
I smile a soft smile, looking up in wonder, as he looks at me to catch the moment.
The picture remains.
One artifact from the night that preceded the day where everything was finally over.
One final proof that we were standing on that bridge together, before it finally crashed to the ground.
Posted by Mariel at 10:31 AM No comments: